Through the research I have conducted, I have made several steps toward understanding the topic I am investigating, as well as experiencing some frustrations that have impeded my progress. Upon starting my research, I had been hard pressed to find scholarly sources that could be used to evidence my points and aid me in my work. As such, I obsessively gathered pictures and took interviews that would allow for deeper understanding. After some time of digging through resources that didn’t necessarily help me and trying to find a stronger primary source than the book of war, I had become incredibly jaded towards my work and I wanted little more than to be done with the project altogether.

Thanks to the efforts of one Professor Herrman, research has made decent progress. My primary source has been replaced by a more interesting, broader website filled with knowledge. New scholarly sources, with references to several other potential pieces of a similar caliber, have now come across my desk, giving me the chance to take solid strides in the direction of a complete research piece. Now that I have a stronger base to build up from, I expect that work on the research project will be, in general, much more fruitful and rewarding than it was beforehand.

Over the past week, I used my position in Medieval Combat to the fullest and tried to gather information through interviews and stories that may help my research along in numerous ways. Donning the name that I use on the fields of war, “Injury”, I began to discuss many ideas about rules, identity on the battlefield, weaponry, and the state of politics in the sport. I was reminded of the importance of the rules as I dug further into the topic with the club vice president and several long time veterans. Swords clashed on swords as war rhetoric was thrown from behind a shield of walls, and I recorded as much of what was being said as possible.

Weapons check for safety and construction

My time spent doing club activities has allowed me to take a step closer to the research project, and gives me a unique insight on the nature of combat and the sport in general. While others are limited to understanding their projects through mediums, and might not ever be able to physically examine the object of their study, I plan to take full advantage of the opportunity granted to me by the proximity of my object of interest. Because I can simply walk a short distance and immerse myself into combat, I have been able to gather much data and several ideas for my research.

I have had to alter my research topic quite a bit in order to narrow my research. Originally, I had planned to simply compare Medieval Combat and war in general to try to create a conversation between the two. Then, my focus started to narrow before finally settling on comparing the rules of war and the rules of Medieval Combat, and trying to understand the differences and similarities between the two. Thus, I have taken it upon myself to thoroughly study the “Book of War”, the rule book for Medieval Combat, as well as the Geneva Conventions and rules of war over the years. Overall, my studies have greatly adapted to these new ideas and progress has been made towards an end goal.

My present plan for research is to investigate the idea of war without death and the connection that sports emulating war have with war itself. As professor Izenburg explained, “war is the artifactualization of death”, yet what happens to war when the concept of death is removed? The games replicating war, such as Medieval Combat, see combatants fight to the death and even die in epic manners, only to rise again in eternal conflict and recurring fighting. These sports go to great ends to reproduce war as it is imagined, and it is possible that we can infer different things from these man-made conflicts.

Many questions linger around the nature of this research. Why should games of war have anything to say about human nature of any relevant concept if they lack true death, a death that incurs some sort of loss in the combatants? Is death integral for a war to be considered anything more than a scuffle or a game? Do the mechanisms that describe conduct in a game lack any application to war and the conducting of such? All of these questions are paramount to the project as a whole, and will be discussed in full.

Sources for this project are, in short, low in supply. Since I have access to several meeting grounds for Medieval Combat, as well as several sports teams practicing in the ARC, I will be using the previous assignment’s experiences with gathering interviews and trying to gather my own sources to supplement what is available to me through the libraries and online archives. 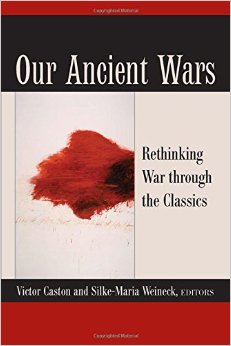